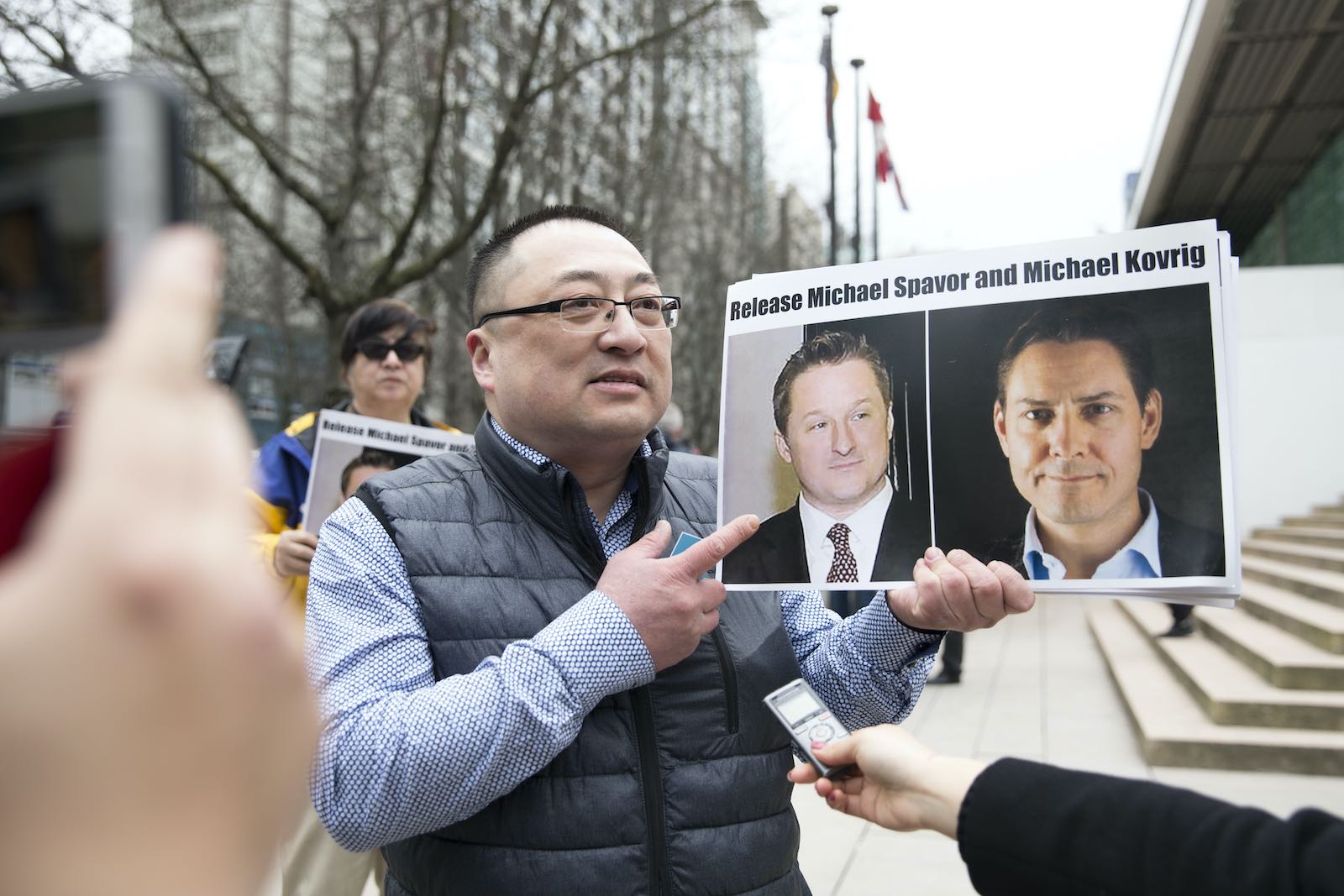 A demonstration in support of Canadians Michael Spavor and Michael Kovrig, detained by China, outside court in Vancouver in March 2019 during an appearance by Huawei Chief Financial Officer Meng Wanzhou (Jason Redmond/AFP via Getty Images)

It has been now 772 days since Michael Kovrig, a diplomat on leave from Canada’s foreign ministry, and Michael Spavor, a Canadian business consultant living in China, were detained by Chinese authorities in apparent retaliation for the arrest ten days earlier by Canadian authorities of Meng Wanzhou, the chief financial officer of Huawei Technologies and daughter of the firm’s founder, Ren Zhengfei, on an extradition request by the United States.

While Meng and the “Two Michaels” have all been prevented from going home, the conditions of their detention differ radically. Ten days after her arrest, Meng was released on bail and has been living in her $13 million Vancouver mansion; she has a GPS ankle bracelet and a curfew, but she is able to leave her house. In December, her husband and children in China were given permission by the Canadian government to visit her.

Kovrig and Spavor, by contrast, who have both been charged with “spying on national secrets” and providing intelligence to “outside entities,” have been kept in three metre-square cells at detention centres in Dandong and Beijing, with the lights kept on 24 hours a day, daily interrogations and spartan conditions. Chinese authorities have purposely limited Canadian consular access to both men, citing the coronavirus pandemic. They have not been permitted regular contact by family, though Kovrig was allowed one 15-minute phone call to talk to his ailing father, and in 2020, the two were permitted brief phone calls home over Christmas.

There can be little doubt that Meng, Kovrig and Spavor have all been caught in the broader geopolitical struggle that continues to unfold between the United States and the People’s Republic of China.

For many years the US has been keen not only to undermine Huawei as a global provider of 5G technology, but also to retaliate against what it has persistently claimed has been Huawei’s theft of American intellectual property. Charges of fraud allegedly committed by Meng in 2013 was one of the ways that the US conducted what the Los Angeles Times has, not inappropriately, called a “war against Huawei”.

The criminal charges brought by the US against Meng might, as a number of observers have argued, be thin gruel and relatively unusual, but as Huawei’s CFO, she was hardly an innocent pawn in the US-PRC struggle. Kovrig and Spavor, by contrast, were simply in the wrong place, at the wrong time, with the wrong citizenship. Using a well-worn tactic, the government in Beijing simply scooped them up as hostages, as it had done in the past, when the Canadian government acted on an American extradition request.

For Kovrig and Spavor, their fate as pawns in the game of hostage diplomacy being played by China is not about to end soon.

This is in large part because the wheels of the Canadian judicial system grind with painful slowness. Meng was released on bail on 11 December 2018. Since then, the so-called “judicial phase” of the Canadian extradition process has unfolded at a glacial pace. In March 2021, Meng’s lawyers will return to court to try to convince Associate Chief Justice Heather J. Holmes of the Supreme Court of British Columbia that Meng’s arrest was politicised and therefore she should be released now. It will not be until April that the extradition proceedings proper will resume.

The judicial phase will end some time in 2021 with a decision by Justice Holmes. If she finds that the evidence is not sufficient to warrant committal for surrender to the US, Meng will be released immediately. If the court orders Meng committed, however, she would have the right to appeal, which would delay the process even further.

If Meng appeals that decision and loses, then the determination moves to the minister of justice, who under Canadian law is given extraordinary discretion over whether a person committed for extradition by the courts is actually surrendered to the requesting state. Given that wide-ranging authority, the government of Justin Trudeau could, if it wished, simply make the case disappear after the judicial phase by refusing to surrender Meng to the United States.

Unfortunately for Kovrig and Spavor, the outlook remains bleak. If Meng is surrendered, they will likely be tried, found guilty and incarcerated until Meng is released.

However, that is unlikely to happen. Unless there were overwhelmingly compelling legal reasons, a refusal would be seen as kowtowing to China’s hostage diplomacy, which would not go down well either in Canada or in the United States.

In Canada, attitudes towards China have dramatically soured because of the Chinese government’s assertive wolf-warrior diplomacy and in particular its resort to hostage diplomacy. While there is considerable public sympathy for the plight of Kovrig and Spavor, the Trudeau government has indicated that it will not buckle to Beijing’s coercion.

Nor would the Americans be pleased with such a decision. It is true that the US government could readily negotiate a deal with Meng that would see the charges against her dropped in return for some concession by Huawei. However, it is unlikely that the new administration of Joe Biden will opt to back away now that the US has Huawei on the ropes.

On the contrary, it is likely that Washington will let the judicial process in Canada play out. If that process results in Meng being surrendered, American leverage over Huawei would be maximised. But even if Canada eventually refused to surrender Meng and returned her to China, little would be lost, since much of the damage to Huawei has already been done.

So at this point, the ball remains in the Canadian court. But unfortunately for Kovrig and Spavor, the outlook remains bleak. If Meng is surrendered, they will likely be tried, found guilty (the fate of 99.9% of those who face court in China) and incarcerated until Meng is released.

And even if Meng is not surrendered to the United States, there is no guarantee that Kovrig and Spavor would be freed. After all, Beijing has spent 772 days asserting that there is no relationship between the Meng extradition and their arrests.

It is thus entirely possible that China will decide to send another signal – by prosecuting the “Two Michaels,” finding them guilty and then incarcerating them for as many days as Meng was detained by Canada – just to remind Canadians, and everyone else besides, that there are costs to crossing a great power with Chinese characteristics.