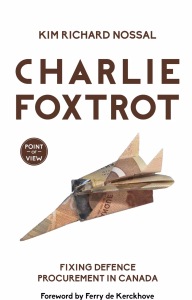 There are actually two different questions in the title of this post. The first is: why is this book necessary? The origins of its argument about Canadian defence procurement can be traced all the way back to the late 1970s. Shortly after I was hired by McMaster University in 1976 to teach in the political science department, the Liberal government of Pierre Elliott Trudeau decided to buy a new fighter aircraft for Air Command (as the Royal Canadian Air Force was known back then). One of my new colleagues, Michael M. Atkinson, who had arrived at McMaster the same year I did, suggested we do some research on that decision. We were not really interested in defence procurement, but rather in how political authority operated in a Westminster parliamentary system: how cabinet ministers were able to control the natural tendencies of bureaucrats to advance their own narrow bureaucratic interests. We knew that the Trudeau government had been badly burned by the Department of National Defence in 1975, when it bought the Long Range Patrol Aircraft, and we were interested in whether the ministers in cabinet would learn from that burn.

They did. As our 1981 article in the journal Canadian Public Administration showed, the decision that gave us our present fleet of CF-18 Hornets reflected the cabinet’s desires exactly. And, in the view of those who have looked at it since, the New Fighter Aircraft (NFA) program was one of the best-run defence procurements in Canadian history. The reason was simple: reflecting Pierre Trudeau’s well-known affinity for rational governance, the NFA program was carefully structured so that the bureaucrats were tightly constrained, with the result that the program delivered the ideal defence procurement outcome: the right plane, at the right price, and at the right time.

After our CPA article, however, neither Mike nor I did further work on defence procurement. He went on to become one of Canada’s foremost specialists in public policy, eventually heading the Johnson-Shoyama Graduate School of Public Policy at the University of Saskatchewan after stints in senior administration at both McMaster and the University of Saskatchewan. I continued to research and write on Canadian foreign and defence policy, but I did not look at defence procurement.

However, it was because of our research on the NFA program so many years ago that, when the CF-18s were coming to the end of their lives, I found myself curious about how the Conservative government of Stephen Harper would go about finding a replacement. Would they run the kind of successful procurement that Trudeau had run in the late 1970s?

The short answer is, no. The Harper government decided to play political games, unabashedly using the CF-18 replacement program as a political tool. It selected the Lockheed Martin F-35 without making any serious effort to explain the choice, using often shonky rationales. It chose to sole-source the CF-18 replacement instead of running a competition as normal for a huge capital project like this. And it chose to use the palatably low “fly-away” cost rather than the full life-cycle cost of the F-35.

Given the political games they played with the F-35, the Conservatives should not have been at all surprised that the opposition Liberals under Michael Ignatieff returned the favour. From 2010 onwards, the Liberal opposition took particular delight in politicizing the F-35, and helping to turn it into the spectacular flame-out it became when the Conservatives “reset” the program in December 2012.

As I watched the unravelling of the CF-18 replacement with the kind of morbid fascination that draws us to look at a bad accident, I wanted to make sense of this failed procurement. So I found myself writing another article on another “new fighter aircraft,” but this one at the grave end of my academic career. Writing in International Journal in 2012–13, I argued that one of the key reasons for the failure of the procurement was that the Conservatives had not bothered to look back at how the Trudeau government had managed the program the last time that Canada needed new fighter aircraft. Reflecting the hyper-partisanship that was so much a mark of the Harper era, the Conservative government clearly believed that the Liberals, and particularly the Pierre Trudeau Liberals, had nothing to teach them about governing.

It was the process of looking at the F-35 fiasco that prompted me to take a closer look at defence procurement in Canada. It became clear that what we saw in the case of fighter aircraft reflected a much wider problem. I wanted to look at those broader patterns, explain why Canadians have had such difficulty getting defence procurement right, and offer some fixes for the future. Thanks to the encouragement of J. Patrick Boyer, the general editor of Dundurn’s Point of View series, Charlie Foxtrot was the result.

But then there is the second question: why the title “Charlie Foxtrot?” The title for this essay came from a conversation with a friend in the Canadian Armed Forces. I was always a big fan of Jon Stewart, who hosted The Daily Show on Comedy Central from 1999 to 2015. One of Stewart’s recurring segments featured a coarse military term from the Vietnam War era, though Comedy Central’s censors always bleeped out the audio and rendered the word on-screen as “clusterf#@k.” But Stewart invariably used the word correctly: its Oxford English Dictionary definition is “a bungled or botched undertaking,” and Stewart’s segments always focused on something that had gone spectacularly and badly wrong. When I jokingly suggested to my friend that this would be an excellent word to describe Canadian defence procurement, he wholeheartedly agreed, though he reminded me that in polite military discourse, the phonetic code “Charlie Foxtrot” would likely be used instead.

I decided to recommend this title to Dundurn because I believe it accurately reflects the propensity of the Canadian government to routinely screw up big-ticket defence procurement programs. But I also thought a rudely transgressive title would also be appropriate to convey how we as citizens should feel about defence procurement failures in Canada having become so normal that our politicians can and do throw hundreds of millions of dollars away seemingly without a second thought, and certainly without suffering any political consequences.

Indeed, as Charlie Foxtrot was being written and published, the Liberals under Justin Trudeau continued the very patterns it identifies: since taking over the Liberal leadership in 2013 and the prime ministership in 2015, Trudeau fils has unabashedly played political games with the CF-18 replacement, continuing and extending the fiasco created by Conservative mismanagement. But the Liberals are not the ones paying for the fiasco: it will be Canadian taxpayers in the 2020s on the hook when the costs of today’s games will come due.

As I researched and wrote this book, I became increasingly angered by the negative effects of the political gamesmanship that pervades defence procurement in this country: the waste of scarce resources that could be used more productively; the diminution of Canada’s military capabilities, which in turn diminishes our capacity in global affairs; the willingness to kick hard political decisions down the road for future governments to deal with; and, most importantly, the risks to the soldiers, sailors, and aviators put in harm’s way by our politicians with equipment that too often is aging, rusted out, or simply inappropriate for the task at hand.

And thus I am hoping that this book will prompt other Canadians to begin to question why politicians in Ottawa continue to insist on playing politics with defence procurement, and why they can’t do better when it comes to equipping the Canadian Armed Forces.