Department of Political Studies and Centre for International and Defence Policy, Queen's University

What should have been a straightforward defence procurement decision — replacing Canada’s fleet of aging CF-18 Hornets — instead turned into a fiasco. Indeed, the F-35 nicely reveals everything that is dysfunctional in Canada’s approach to defence procurement.

The story of Canada’s F-35 acquisition begins, paradoxically, with Jean Chrétien, the Liberal prime minister who is usually slagged for the “decade of darkness” in defence policy between 1993 and 2003. In 1997, the Chrétien government decided to join an American-led multinational consortium that would produce a new Joint Strike Fighter (JSF).

The JSF was the result of an important decision by the US Congress in 1994: in the future, the US Air Force, the Navy and the Marine Corps would all fly just one fighter (hence Joint Strike Fighter). To make the costs more palatable, the US created an international partnership of American allies. Each partner would invest in the program, and each ally’s aerospace firms would eventually participate in the global value chains created by the program. In 1996, Boeing and Lockheed Martin were chosen as the two firms to compete for the winner-take-all contract.

In January 1998, the Chrétien government formally signed on with seven other allies — Australia, Britain, Denmark, Italy, the Netherlands, Norway and Turkey. As a “level 3” participant, Canada invested approximately US$440 million, with the expectation that Canadian aerospace firms would receive contracts from the firm that won the competition. In 2001, Lockheed Martin’s F-35 Lightning II was chosen, and in 2002, the Chrétien government signed on to the next phase of the program.

Joining the JSF program was a smart decision. While Chrétien might have been attracted by the benefits to Canada’s aerospace sector, the F-35 was also a strategically sound choice. Simply put: if the F-35 was the only fighter that the US was going to fly in the 2020s and 2030s, then it was the logical fighter for Canada. Since the cancellation of the Avro Arrow in 1959, Canadians have always flown American fighters, and so it was logical that the CF-18s would be replaced by the F-35 in the fullness of time.

Unfortunately, however, what should have been a straightforward process was botched by the Conservative government of Stephen Harper. For instead of looking at how the Liberal government of Pierre Trudeau acquired a new fighter aircraft in the late 1970s, the Harper Conservatives took the know-it-all view that they needed no lessons from the Liberals. As a result, the Conservatives chose not to run a proper replacement competition for the CF-18.

Instead, the Harper government just drifted into choosing the F-35. In December 2006, it signed on to the next phase in the JSF program, and then in its 2008 defence paper, Canada First Defence Strategy, it promised to acquire 65 “next-generation fighters” (which could only be the F-35, since the only other “fifth-generation” fighter, the F-22 Raptor, was not being made available by the US to its allies). And then, on July 16, 2010, the Harper government announced that it was spending $9 billion to acquire a fleet of 65 F-35s in an untendered, sole-sourced contract.

The Conservatives never offered Canadians any clear strategic rationale for the F-35. Instead, the Harper government simply saw the acquisition as a useful way to boost its political fortunes. Thus, rather than making the announcement in Parliament, it 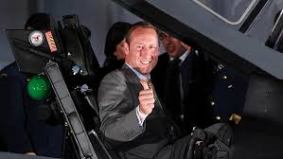 unambiguously used the F-35 decision as a prop: in a classic case of “government by photo op,” a model F-35 was trucked to Ottawa by Lockheed Martin so that Peter MacKay, the minister of national defence, could be photographed in the cockpit giving a smiling thumbs-up on a Friday afternoon in July.

It was at this point that the Harper Conservatives ran into trouble. In contrast to the late 1970s and early 1980s, when theProgressive Conservative opposition wholeheartedly supported the Trudeau government’s acquisition of a new fighter aircraft, in 2010 the Liberal opposition felt no such compunction to be bipartisan. On the contrary: the Liberals took every opportunity to politicize the F-35 and to use it to bash the Conservatives.

The Liberals called in the Parliamentary Budget Officer (PBO), Kevin Page, to examine the F-35, and their leader, Michael Ignatieff, promised in October 2010 that a Liberal government would cancel the F-35 and hold an open competition. In March 2011, Page obligingly reported that the Conservatives were understating the “real” costs of the F-35. Instead of $9 billion, a fleet of 65 F-35s would in fact cost $29.3 billion. The dispute over the “real” cost of the F-35 quickly became part of a larger dispute between the Harper Conservatives and the opposition over the release of financial information to Parliament. The Harper government was declared in contempt of Parliament and was brought down by a motion of non-confidence on March 25, 2011.

While the F-35 was not an issue in the election that followed, the question of cost dogged the Conservatives. The Auditor General investigated the procurement and, in April 2012, issued a damning report that indicated not only that the procurement process had been inappropriately run by the Department of National Defence (DND) and Public Works and Government Services Canada, but also that the cost estimates were woefully inaccurate.

At this point, the Harper government reorganized the F-35 program, introducing a governance model that mirrored almost precisely the mechanism that the Trudeau government had used for the New Fighter Aircraft program in the late 1970s (not at all coincidentally, the Trudeau government had adopted this governance mechanism after having been burned by DND over the long-range patrol aircraft acquisition in 1975). The Harper government also called in KPMG to conduct an independent audit of the F-35.

In December 2012, just two and a half years after the announcement that Canada was acquiring 65 F-35s for $9 billion, KPMG reported that the actual cost of the F-35 acquisition was going to be $45.8 billion. The Harper government did not even try to explain that the discrepancy in all the figures could be explained by differences in the “life cycle” costing. The original very palatable figure of $9 billion had been just the “fly-away” cost, without any “life cycle” costs. By contrast, the PBO had used a 30-year life cycle, where all the costs associated with acquiring, operating and then disposing of the aircraft were included. The Auditor General believed that a 36-year life cycle was more appropriate; KPMG had used a 42-year life cycle. The Harper government could have reminded Canadians that the “real cost” remained unchanged: whether 36 years or 42 years, the F-35 would cost the Canadian taxpayer approximately $1 billion per year. But by then it was too late; on December 12, the government just gave up, “resetting” the CF-18 replacement program and opening it up to other aircraft.

In the 34 months between the 2012 “reset” and the defeat of the Conservatives in October 2015, there was little movement on the replacement of the CF-18. There was, however, one final act of politicization that confirmed the fall. On September 20, 2015, in the middle of the campaign, the Liberal leader, Justin Trudeau, announced that a Liberal government would not acquire the F-35 but would run an open competition for a CF-18 replacement. Trudeau added, without any evident irony, that in this “open” competition for a CF-18 replacement, the F-35 would not be allowed to compete. Even though this exclusion is not mentioned in the mandate letter from Prime Minister Trudeau to his minister of national defence, Harjit Sajjan, it remains possible that the F-35 is out of the running.

The rise and fall of the F-35 reveals why defence procurement in Canada is so dysfunctional.

Canada does not produce regular defence White Papers that identify global threats and what Canada needs to respond appropriately to those threats. As a result, cabinet ministers — whatever their party affiliation — tend to be unable to justify clearly why a particular weapons system is needed, and they leave it to DND to identify procurement needs. But DND, left to its own devices, will behave like any bureaucracy unconstrained by political authority: it will do whatever is necessary to maximize its own preferences, including engaging in all the bureaucratic political stunts so graphically described by the Auditor General in his 2012 report. Trudeau père understood that in defence procurement, the bureaucracy must be carefully reined in, which is what his government did in the New Fighter Aircraft procurement — and why the CF-18 acquisition continues to be widely regarded as one of the best-run defence procurements in Canadian history.

This is nothing new. Trudeau fils promising to ditch the F-35 in mid-campaign in 2015 was no different than Chrétien promising in mid-campaign in 1993 to cancel the EH-101 helicopter contract signed by the Progressive Conservative government of Brian Mulroney. The Harper Conservatives themselves unabashedly used military procurements for overt partisan political purposes. They should not have been surprised that the Liberal opposition returned the favour.

But playing politics with defence acquisition has real costs. Chrétien’s promise in 1993 cost Canadians approximately $500 million: $89.2 in contract termination costs and some $400 million in project costs that in the end were spent for nothing. Harper’s and Trudeau’s politicization of the F-35 acquisition promises to be equally costly in the future.

For Canada will continue to need fighters. But if the Trudeau government moves to acquire an “interim” fleet of another fighter — Boeing Super Hornets or a European fighter — it is unlikely to reduce costs (since it costs more to operate two fleets at once). More important, an “interim” solution does not address what the Royal Canadian Air Force will be flying in the 2020s and 2030s when the US and many of our allies will be flying F-35s.

Of course, kicking the can down the road ensures that this will not be an issue that the Trudeau Liberal government itself will have to confront. And just as, 22 years later, we are still paying in a variety of ways for the cancellation of the EH-101 by the Chrétien Liberals, so too will Canadians in the 2020s be paying — handsomely — for the politicization of the F-35 by both the Harper Conservatives and the Trudeau Liberals.